I’m falling behind on my blog again, as I attempt to wrap up this wonderful adventure.  That trip that took me around the island of Sicily, through some of the best cities in Italy to my beloved  Cinque Terre, now ends in another favorite city. London.

After awaking in our cozy and very happy place, Vernazza, Mom and I begrudgingly packed and walked down the train station. We had to catch a train to Genoa… to catch a flight to London.

Our reluctancy to leave got the best of us. We missed our train. While we were able to catch another, nearly an hour later, we found ourselves stopping at every village along the way. Anxiously biting my nails, I check the time as the train halts to yet another stop at another quaint and quiet country platform.  Eventually we alight in Genoa, hold our breath in hopes we pass the stringent baggage weight requirements of Ryan Air, and we’re in the air. Next stop, London!

That night, we grabbed Chinese food for dinner in Chinatown. After weeks of pasta and pizza, it was a nice change of pace. (regardless how much I love Italian food!) The rest of the evening was chatting and laughing with our new roommates and looking forward to our 4 days and nights in London.

If you’ve been following along my blog for a bit, you’ll remember my valiant attempt to see Hampton Court  the year before, only to be defeated as one thing after another worked against us. That chain of events is what led me to add Hampton Court to the top of the list this time. Though  we ended up out of way, far into Surrey after missing a connection, we still made it! While most people probably think, “cool a palace” but for me it was more along the lines of “oh my god, YAY!.” I’m fairly obsessed with the Tudors.

Hampton Court was originally built by Cardinal Wolsey, Lord Chancellor, but 4 years after completion, Wolsey gave the palace to Henry VIII in an attempt to save his rapidly declining favor. He failed and died for treason, but Henry sure loved his new palace, extending and rebuilding much of it!

Inside the main gates

Head of the Table in the Banquet Hall. The palace had 30-course banquets and nearly 1,200 mouths to feed! 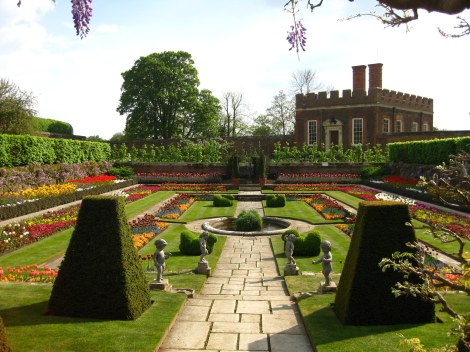 The 60 acres of gardens around Hampton Court were unbelievable and I know I don’t need to say this, but I still will… gorgeous! Oh, to be an English queen spending days wandering the gardens (preferably one that kept her head) 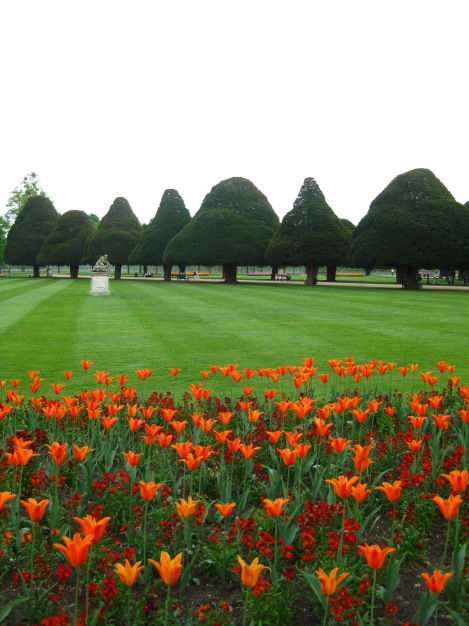 Parts of the enclosed “Wilderness” section of the gardens, which ends at the maze with its half mile of paths

Hurrying back from Hampton Court, we got ready, enjoyed a Thai food dinner and had a great night enjoying Chicago on the West End. 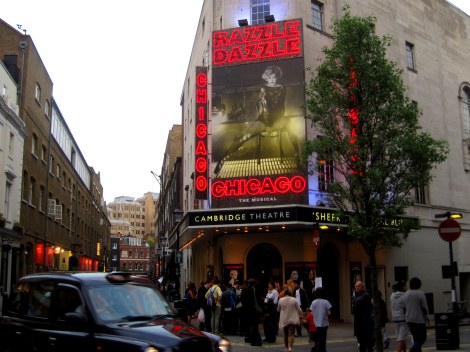 11 responses to “Back in London: Hampton Court”