Upon our arrival in Catania, Victor helped connect us with a local guide that would take us up to Mount Etna for a hike. Mount Etna is Europe’s highest and most active volcano. Not only is it active (holy crap) but it has one of the world’s longest documented records of eruptions. In case this isn’t absurd enough, the most recent eruption was in February 2012 (and again in April!)

When our guide, Carmelo, picks us up and assesses our clothing, the realities of our impulse decision to hike Etna hits me. Do we have any footwear remotely resembling hiking boots? No. Do I have a warm jacket for the wicked winds and chills up there? Only if my cute Guess raincoat will suffice. Did I know there was still some snow on the mountain? No, no I did not. I suppose I didn’t give it proper thought. I heard “hike a volcano” and simply thought, “Hell yeah, let’s do it!” That was it! No consideration that our hike might not host one of those short distance, clearly defined nature trails that are appropriately uphill, but yet well-worn from numerous hikers. 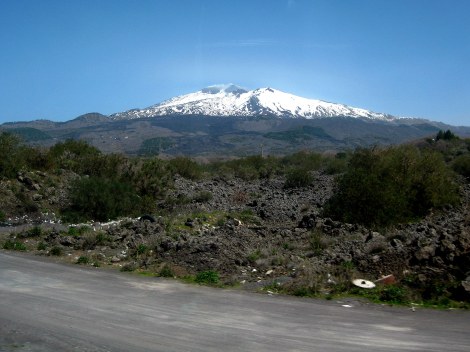 During the 45 minute drive to our starting spot near the base, Carmelo, who is a geologist, shares the history of Mount Etna and explains the general dynamic of volcanoes in general. He tells us how different they are around the world, from the way they’re formed to the way they erupt. A native Italian, he speaks to us in mostly English, but enjoys plenty of casual conversation with David in Spanish. Carmelo has traveled and lived around the world, poetically telling us that he “is a victim of that sweet disease wanderlust.” Once outside the city, we make a few stops to see outcropping of volcanic rock in the harbor and wind our way up, up, up… through the small villages on the face of the mountain, always at risk of an eruption. “While the volcano causes damage to roads and buildings, it’s not as dangerous to the most precious thing… human life,” Carmelo explains. People live near volcanoes because of the rich minerals, geothermal energy and fertile soil. And the slow-flowing lava, gives people time to evacuate. 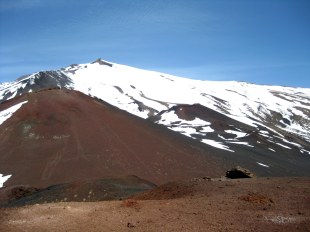 At our “last chance” stop we grab much needed coffee, water, and a small picnic lunch for later. Soon we’re climbing our first crater… and soon we’re almost blown off… into the abyss! I have never experienced winds this intense! Jenn and I stop halfway across to grab a rock, while the wind whips by threatening to take us with. I am not exaggerating, I literally felt like I was a paperdoll. David makes it a few yards further, before nervously securing himself by another large rock, but Carmelo, at one with nature and very in his comfort zone, simply extends his arms and leans into the wind. It holds him up completely and he looks like a vertical skydiver! After that intense experience, we continue to drive a bit further up the mountain. Finally he parks and we begin the real hiking. Carmelo gives us a hat and warmer jackets (he must be used to unprepared tourists!) and noting my shoes, asks if I want boots. Still unaware of the realities I’ll face, I decline, thinking, “I plan to replace these shoes anyway, so no bother if they get ruined by the snow and ash.” And oh did they ever; practically falling apart. 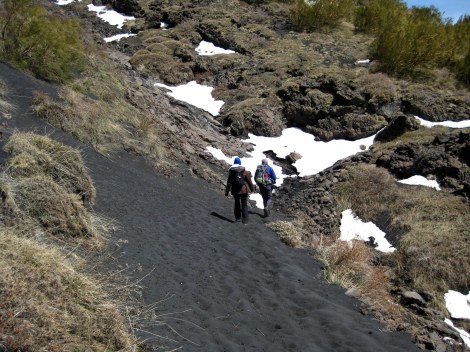 The hike was tough, a real mountaineering-type hike. No mellow incline, not trails here… we hiked straight up the side of the mountain, digging for footing in soft volcanic ash with every step. When we reached sections with layers of snow, I got to experience what wet ash felt like squishing around in my shoes. (Can I change my mind and get the boots after all?!) I have never felt this much like such a clueless city-person to date! After an hour and a half of panting, David swearing to quit smoking, and constant checks to see how high we are, we stopped for lunch. Here we’re rewarded with a stunning, majestic view over the city of Catania, with the sea in the distance. Around us are expanses of mountain wilderness, small craters, and further below the mere dots of the villages we passed. Looking above, we see the smoking main crater of Mount Etna… pleasantly reminding us that it is indeed active.

Another hour of hiking, brings us to the crowning glory. A huge crater near the tippy-tippy top stretches hundreds of meters across. We look into it, not only shocked at the immensity, but also that it would be so easy to trip into it! Then what?! I stay a safe number of meters from the edge, agreeing that this was very worth the tough hike! Eventually, we made it back down… ‘skiing’ on slippery snow most of the way. Back in civilization, despite vows to quit made during the hike, David lights up a cigarette to congratulate himself on the accomplishment. *sigh* I find a place to dump my destroyed shoes, and we all grab a quick snack before retiring for a well-deserved nap, just happy that Etna didn’t get the best of us! 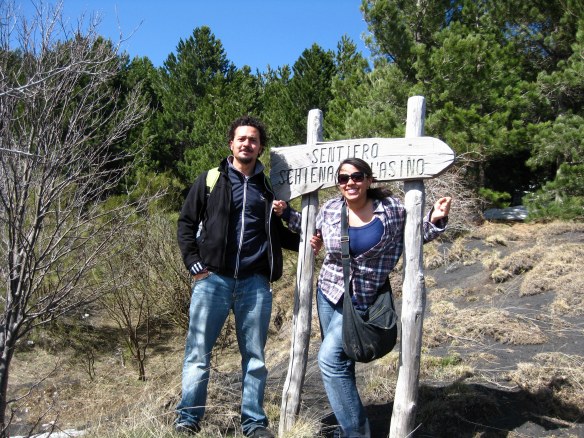 13 responses to “Hiking an Active Volcano”