My late night arrival in Palermo was eventful in a mild, but not completely welcome way. All in all… it went smoothly enough though. I had a temporary scare that my bag was lost during the long trip from LA to Sicily since I was standing for ages at baggage claim with one other woman (didn’t see the tiny sign directing me to the Non-EU Customs baggage claim) Then in my rush to catch the last bus to the city center,  I almost accidentally boarded a team bus with an Irish rugby team instead of the standard airport shuttle bus. They were very friendly and promised not to attack me (um, thanks?) but I only knew my way to the B&B from the specific stop. I had a pleasant conversation on the bus with a local man who gave me tips that included the fact my stop at the Centrale Station was not the safest for una femmina de solo… but upon seeing my increased nervousness reverted back to ‘Va bene, va bene. You’ll be okay.’ Wow. Thanks for the assurance. We managed to carry on a decent conversation in chopped English and Spanish during the 30 minute bus ride. Finally, after stopping, I made the 7 blocks to the B&B at midnight… just… fine. Jenn was still up and we chatted about our travels for a bit and I don’t remember waking or even moving until 9am when our alarm went off. 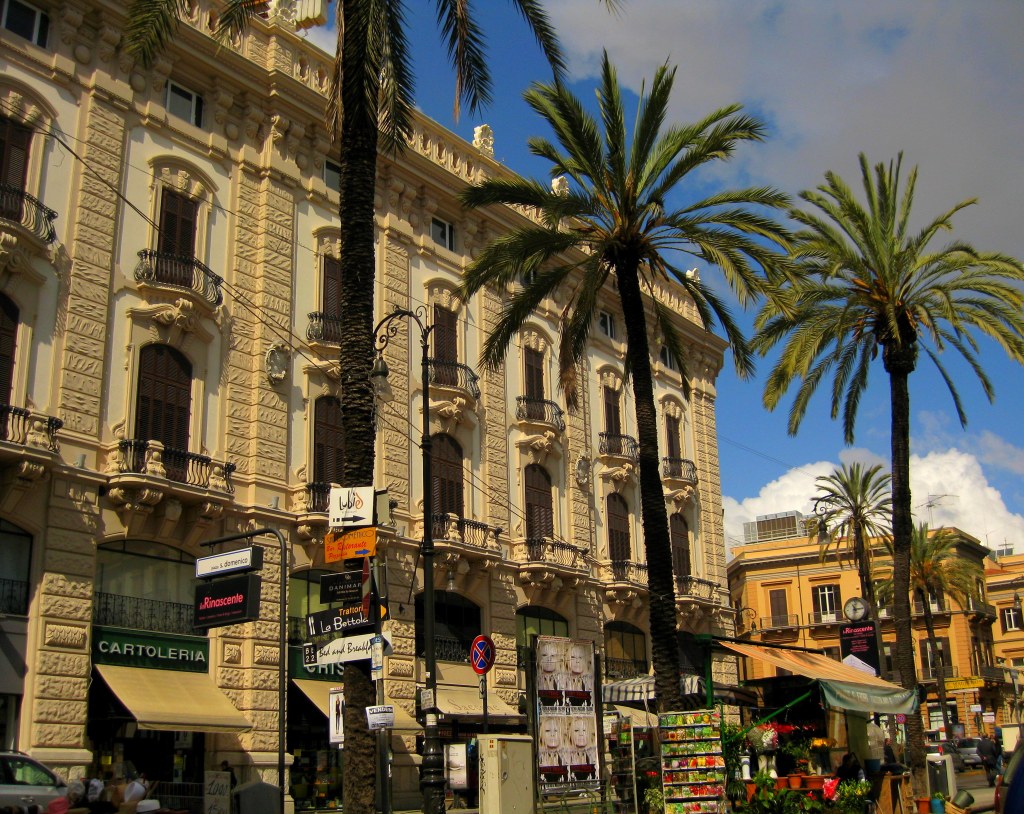 The next morning, well rested, I was finally able to take in my surroundings and get back in travel mode. Our B&B is very cute and complete with high ceilings and a little balcony. After a quick breakfast, we decided to spend the day wandering around Palermo and exploring the markets.

The street of Via Roma looks very different in the daylight. It’s a shopping street for sure and I’ve passed plenty of cute jackets, shoes, and tops, I would like to purchase. I’m not a big shopper when I travel though… perhaps that 1.41 conversion rate has something to do with it. Ugh! We stepped down into a side street that led us to La Vucciria, one of the oldest and most colorful street markets in Palermo. Passing the large hanging tuna fish, spices, olives and butcher and fruit stands, we spent a considerable amount of time debating if it was too early to purchase all of the cute, tasty looking jars of pesto. I never knew there were so many flavors of pesto! Do I really want to carry small, glass jars around Italy for the next three weeks though? Probably not yet.

Pistachios are a popular item in the region and I’ve noted one can find pistachio EVERYthing. Pastries, pesto, honey etc. I’ve also noted that pastries themselves are delicious here! While Jenn is on a mission to leave no pastry shop unexplored, I’ve been holding out for tasty cheeses. 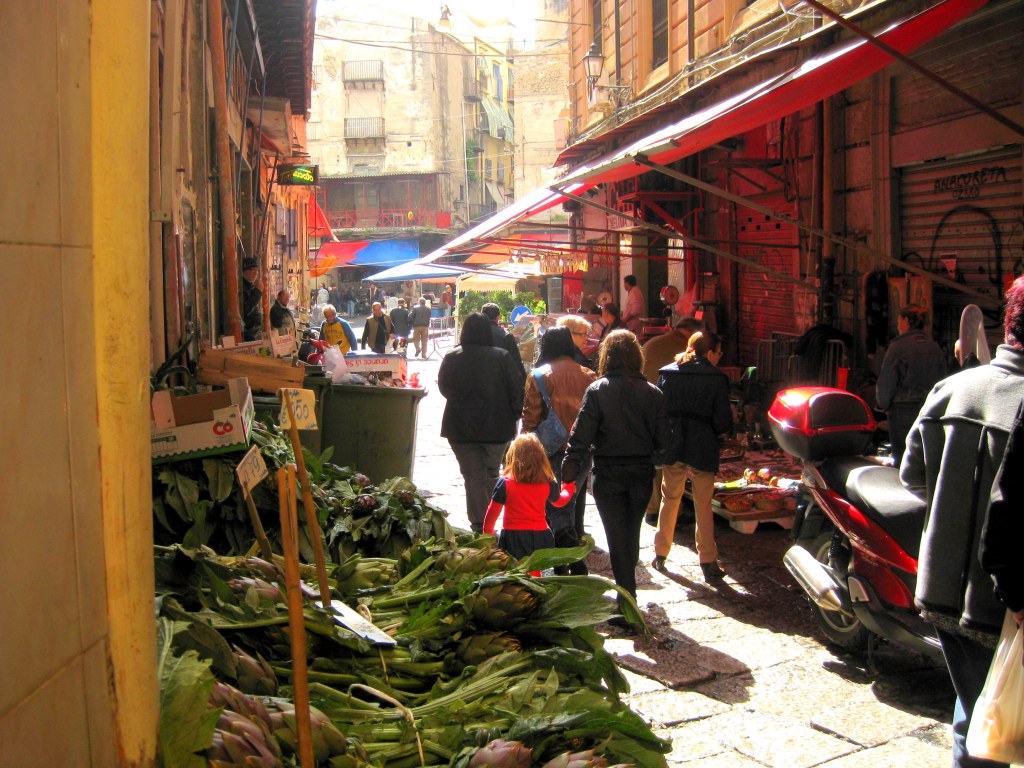 Unlike my former trip to Italy, here in Sicily it seems nobody speaks English. While I actually appreciate this… I should be forced to use the local language.. I am still very thankful that Jenn knows Italian, allowing me to refresh my spotty knowledge of basic conversational phrases. I keep coming up with Spanish words to communicate. Luckily it’s close and I’m sure I’ll pick up more and more as I continue.

We spent the rest of the afternoon strolling around, passing the Teatro Massimo (the largest theatres in Italy, 3rd largest in Europe, and apparently the location of a scene in Godfather III. No idea, never seen any of the Godfathers) Speaking of Godfather… nobody speaks of the mafia, nor should you. If I didn’t know, I certainly wouldn’t know this used to be the main hub for it. The city feels very safe, is actually quite fashionable around, and the people are incredibly friendly. I feel safer here than I did in Rome… or Los Angeles!

Passing through a small park across from the piazza, we noted the creepiest statue ever. At first glance it’s a smiling boy holding a jump rope, but upon closer inspection we realized it’s actually a very creepy boy with a grimace… or grin… and he’s holding a machete/scythe type weapon! I just asked Jenn how she would describe the smile and the response I got was, “I don’t know… let’s just never go back there again.” We’re a bit concerned about Children of the Corn type nightmares. Alarming statue… wonder the purpose. ??? Heading back to our room, we enjoyed a delicious spinach, ricotta lasagna with artichokes before siesta time when all the shops and restaurants close for a few hours.

Day 1 success. Happy to be traveling again. I quickly remembered why I crave it so much.

7 responses to “Back in travel mode – Palermo”