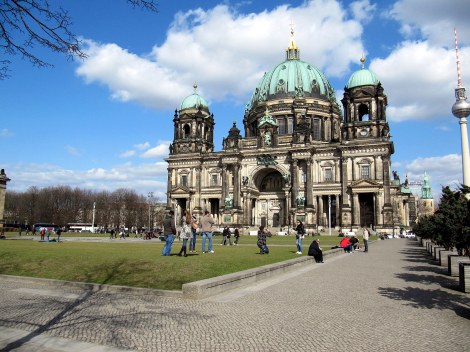 1. That currywurst is tasty! A great lunch on the go.

2. That it’s the 2nd largest city in the EU! 9 times larger than Paris!

3. I learned a lot about Prussian royalty and have plans to read up on them.

4. That Berlin has a large variety of architectural styles making for fun walking tours.

5. That history is EVERYWHERE in Berlin. Around every corner.

6. It’s not surprising to learn now that I’ve been to the capital of Brandenburg, but Potsdam hosts several UNESCO World Heritage sites. No wonder it’s so expensive to live there.

7. I learned that there is still a Prince of Prussia! Seriously! His name is Georg Freidrich
Ferdinand. Last year he married Princess Sophie. All these heirs of medieval families…
what do they do now?! Just princely parties and appearances?

3 responses to “Things I Learned in Berlin”