Our first night in Amsterdam started in the bar below the hostel; a crowded spot full of fellow travelers and locals alike. The main “bar” area was enclosed in glass… and full of smoke. The walls were all glass and added to the smoke-box effect, unfortunately. One would think I had accepted breathing in a cloud of smoke as one of the hazards of going-out since I lived in the Midwest, but c’mon… 6 years by California’s no-smoking laws have spoiled me. Of course, smoke is found in all European bars…  though, I must say, that particular bar in Amsterdam was excessive. Yep, I’m just going to roll with it and say it’s just that particular bar… and not attribute it to the Amsterdam scene itself. Assume what you will. 😉

At a large group table, I found myself sitting next to Alex, a current local originally from Romania, who came to be part of our bar-hopping group over the next couple of nights. He introduced himself and we spent some time chatting about travel, music, photography, and living in Amsterdam. Having a good time with the group around the table, we all decided to join a pub crawl that evening. It was a crazy, hilarious, random and all around great time! 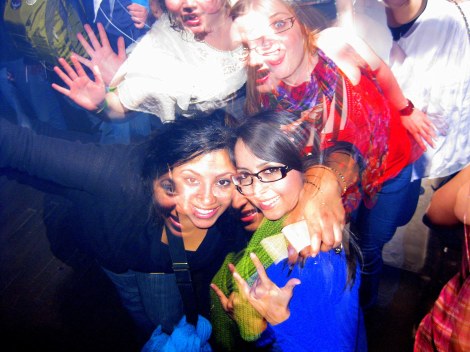 This picture appropriately captures the night.

We bounced around to five different bars and clubs… dancing, chatting, laughing, drinking and meeting fun people. Combine us with an Aussie, a Canadian, a couple of crazy Swedish girls, Alex, and a fellow San Diegan now living in Amsterdam… and you have the makings for a great night. To really round out our group … we met a cute Brit called Jon at the final bar; appropriately dubbed “Smokey’s.” True to form… everywhere, the evening ended with food; pizza to be specific, though I could’ve really used some french fries with mayo at that point.

At 4:30am (or so) Jon walked us back to our hostel… through the Red Light District. I remembering strolling by thinking that it was a bit strange seeing girls posing in windows. Hmmm… I believe that was my last thought of the night.