“Contentment is not the fulfillment of what you want, but the realization of how much you already have.” ~ Unknown 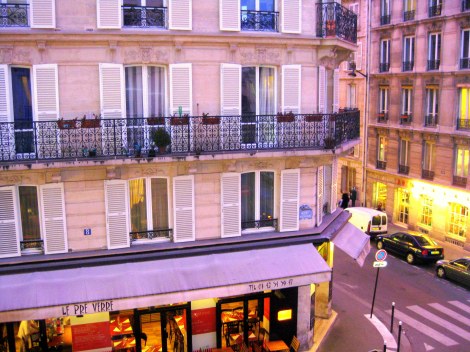 It was right outside our window!

We decided to enjoy another nice, French meal for our last night in Paris… beyond the scope of baguettes jambon and the like that one finds on every corner. Directly across the street from our hotel was Le Pré Verre.… it was delicious. After a short wait, we were escorted to the lower level where we enjoyed our chosen entrees of suckling pig, free range chicken, and roasted mullet. We took our time enjoying the meal and wine with only one butter knife incident. (Kenia, I really don’t know why the waitress kept taking your butter knife and making us swap utensils. We really need to learn more French next time so we can ask.)

Earlier that day, we had seen a piano bar, and decided to check it out after our meal. It was perfect for our mood… and who doesn’t love the piano?? Inside the dark cozy, bar we tucked into a table by the window which provided for fun, people watching… until piano man (sounds like a carnival guy when I say it like that, huh) began playing and chatting. He was actually amusing… not in that cheesy chat-with-the-audience way you see a lot… really amusing. He posed for a picture with a wink and said, “I don’t want to end up on Facebook, though.” Isn’t that what it always comes to? Everything eventually ends up on Facebook.

Says wine bar on the window and piano bar above… why wouldn’t I go in?

It was a great evening. He played wonderful songs; my particular favorite was “Imagine.” During a break he joined us at our table for a drink. We learned Philip was from Marseille and had coincidentally lived for a short time in San Diego. He told us about his time in California… about the surfers, the flip-flops, and the constant sun. It all amused him. What do we do with constant sun? Do we appreciate it? I can confidently say, after the couple of cold days in Paris, I was appreciating that sun more than ever! While we were caught up in conversation, we hear the piano again. What? Turns out this young guy in the bar had asked if he could play a few songs. He was great. The John-Legend look-alike even played “Ordinary People” appropriately. If you play the piano and you look like John Legend… of course you are going to play that song, right? It just makes sense.

The rest of the evening we were warm, we had good wine, we had music, conversation, and laughter.

2 responses to “Contentment was found in the Piano Bar”