“If you are lucky enough to have lived in Paris as a young man, then wherever you go for the rest of your life, it stays with you, for Paris is a moveable feast.” — Ernest Hemingway

Continuing our somewhat aimless wandering of Paris’ Left Bank, we soon found ourselves on what became my most adored street in Paris; Rue Mouffetard. It is the epitome of the charm I find all over Europe. The small, centuries-old cobblestone street was a cluster of so many of my most favorite things. We passed colorful fruit stands, picturesque cafés, chocolatiers with gorgeous tins and foil-wrapped chocolates in the window, wine shops with crates overflowing onto the street, and best of all… fromageries! I admired the endless selection of cheeses, settling on a tasty gouda that we munched on throughout the day.

We took our time popping in and out of different shops and eventually found our way to 6 Rue du Pot-de-Fer… also known as Orwell’s former digs. What a wonderful coincidence as I was still carrying the brown paper bag from Shakespeare’s which held my new copy of Down & Out in Paris & London. I didn’t know it at the time, but this was the building where he rented a room at age 24 and bitterly describes at the start of the book.  Mere blocks away we were soon standing in front of Ernest Hemingway’s first rented apartment. He and his wife Hadley spent the “very poor, but very happy” days that made up his memoir A Moveable Feast here at 74 Rue du Cardinal Lemoine. This neighborhood was the stomping grounds for many other famous writers, including James Joyce, Henry Miller, Jean-Paul Sartre, Samuel Beckett, and Marguerite Duras to name only a few. 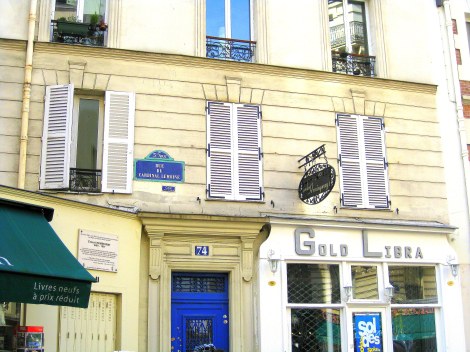 “But Paris was a very old city and we were young and nothing was simple there, not even poverty, nor sudden money, nor the moonlight, nor right and wrong nor the breathing of someone who lay beside you in the moonlight.” — Hemingway

Leaving behind the writers’ haven, we kept walking on our way to Luxembourg Gardens. We stopped at yet another amazing church, Saint-Étienne-du-Mont, where every nook presented statues, detailed stain glass windows towering to the roof, and artwork. Walking through this large church, we admired the massive organ to our left… then the beautifully carved altar to our right. After taking in all we could, in a short amount of time, we crossed the street to the famous Panthéon. Groups of Sorbonne students flooded the area. In the Place du Panthéon we saw yet another (I kid you not) movie being filmed! As the camera captured the pedestrians, we continued on our way, finally reaching Luxembourg Gardens a few blocks further.

I would like to live near Rue Mouffetard at some point.

7 responses to “Finding it all on Rue Mouffetard”