“Turn the world over on its side and everything loose will land in Los Angeles.” – Frank Lloyd Wright

In my attempt to get out of my city and start “exploring my own backyard” a bit more I packed up the family and took the 2 hour drive to Los Angeles for the weekend. With my mom, brother, and kids in tow, I checked into our hotel in Little Tokyo downtown on Saturday morning and immediately ventured out on foot.

While walking, I remember thinking to myself how strange it is that I rarely walk any distance over a few blocks here, while in Europe I walked all over, across town, without a second guess. A nice stroll throughout the interesting downtown streets brought us to Chinatown, which I’ve never taken the time to explore or even pop through. There was so much to hear and see down the crowded main street filled with people, shops, and foreign language. Fresh fish shops, kitschy knick knacks, and a plethora of restaurants surrounded us. I found a grocery store and stocked up on noodles, since they cost so much more at my local Von’s. I am going to attempt to recreate my beloved Mongolian BBQ noodles at home. It probably isn’t even that difficult, but for a non-chef like myself, everything seems a bit intimidating. 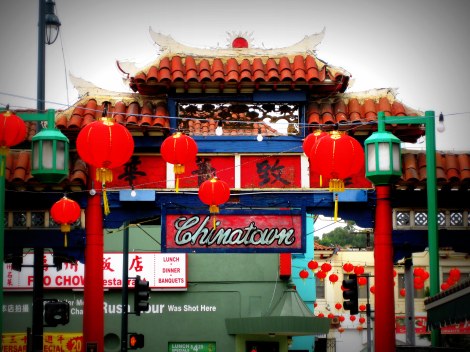 After a few pictures of the beautiful pagoda styled buildings and a tasty lunch of lo mein and chicken with black mushroom, we walked back to the hotel, dropped our purchases, and jumped in the car to head to the beaches.

I have been to the L.A. beaches many times, but they are always on my agenda if I come up for anything during the daytime. We start in Santa Monica, since I have never taken the kids to the Pier. We parked and walked down the 3rd Street Promenade, listened to a very clever Fur Elise rendition by a street performer, and made our way to the pier. Walking past the hotels, I spy my favorite…the Georgian. This turquoise hotel facing the ocean, was where I stayed on my first vacation to California. That was also the first time I had ever seen the ocean…at age 21! 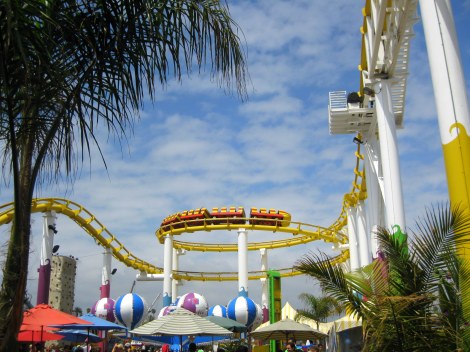 Strolling over the cliffs, in Palisades Park, we admired the view for a while and praised our luck..the sun finally decided to shine…at 1pm, but just in time to enjoy the beach the right way. While rounding the corner, I noticed how crowded the pier is! I shouldn’t be surprise…it’s tourist central. We were handed a flyer, letting us know that Saturday was the Pier’s 100th anniversary and it’s a “Schools Our” celebration! Music caught our ear and we turned in that direction to happen across a stage where the “Groovaloo’s” were dancing. I remembered seeing them on “Superstars of Dance.” I love watching dancing so we lingered to enjoy their performance. The kids could barely contain themselves and were anxiously awaiting the venture over to Pacific Park…the permanent carnival on the pier. We rode the roller-coaster, another thing I haven’t done, and soon we were on our way to the other popular LA beach… Venice. 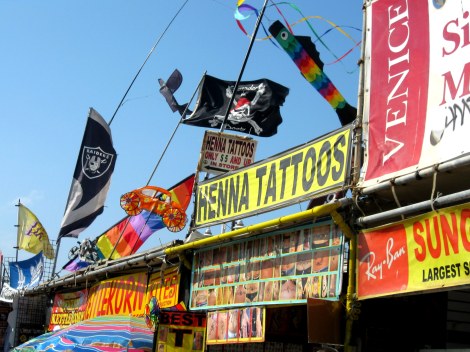 I come here often, but always think to myself that Venice Beach has got to be the best place for quality people watching. You can observe characters of every sort here. While walking down the infamous boardwalk, to your left is the beach, beautiful clusters of palm trees, and a plethora of people. To your right is store after store filled with everything from T-shirts with witty comments to sarongs to glass pipes or to sunglasses. This is the place to come for local artwork, a tattoo, or anything hemp. Street performers fill the pathway and crowds gather. We spend a little over an hour there and then head to the Getty Museum. 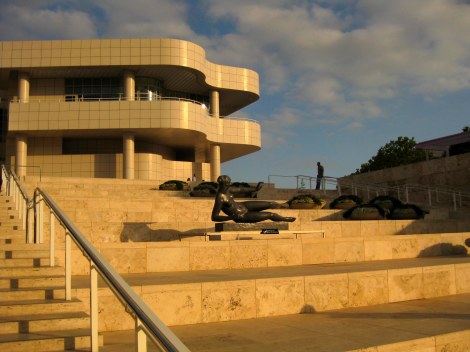 This is my third time visiting the museum, but my mom has never been. I like to visit more for the architecture than the actual art. Completed with Italian travertine atop a hill, the Getty also has one of the most amazing views of L.A. there can possibly be. The panoramic view stretches over miles and miles of Los Angeles neighborhoods. Tonight is Saturday off the 405; the Getty hosts free live music performances on Friday and Saturday nights. The beautiful courtyard became a trendy bar filled with the 20-something population. There were young hipsters and indie kids sprawled all over awaiting the band, “Chairlift” ,to begin performing. We made a quick run through my favorite exhibits and wings, pause to admire the view, and head out.

I had planned to take the kids to CityWalk at Universal Studios for dinner and a 3D movie at IMAX…but we were all tired from the long day outside. A pizza is grabbed and we retire in the room for the night. This morning we popped into the La Brea tar pits… no idea what to expect there… and quickly realize there isn’t much. A tar pit, some fossils, and we’re out in less than 30 minutes, on our way home early enough for some lazy down-time.

I always have a good time in Los Angeles, but always arrive home thinking how glad I am that I live in San Diego. I think there is just a bit too much in LaLa Land and it’s not quite my style in a permanent way.