“How fair is a garden amid the trials and passions of existence.” – Benjamin Disraeli

We left Madrid Tuesday afternoon. The morning we left we took time to finally book a hotel for that same night and a train reservation! After that was taken care of we had 3 hours to make sure we saw Retiro Park. It is a 300 acre park on the west end of Madrid. 300 acres of lush, green, manicured beauty. What a heavenly place. I felt like I was Alice in Wonderland as there were endless pathways between the trees, bushes, flowers etc. One could easily get lost wandering around there. The weather was so beautiful. We strolled for an hour and probably only covered a small section. Every few stretches we would come across a new surprise. One turn led us to the Crystal Palace. It was a large structure made almost completely of glass; behind it was a pretty lake complete with a small waterfall and large Balboa Park-like fountain. The next turn dumped us out of the trees into a plaza with cafes and statues. In the middle was a lake full of people rowing around in little boats. It´s a great first date spot if any of you boys are planning on flying to Madrid to really impress someone! Ha! 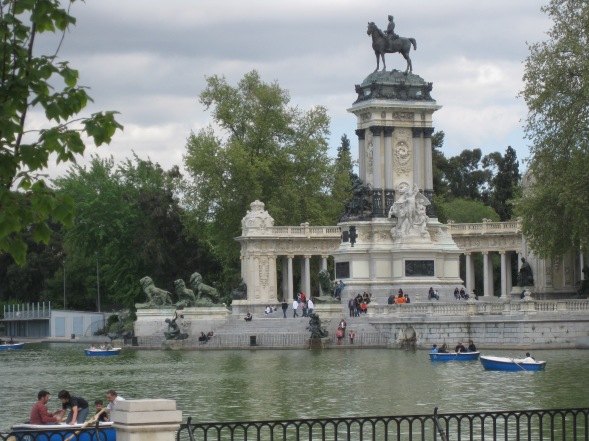 Suddenly it is time to get on the train. I will miss Madrid; I had a great time here and the city is beautiful. So many relaxing places for the locals to spend time. I spent the 2 and a half hour high speed train ride writing in my travel journal. Finally, we are in Barcelona! Our welcome was completely different than in Madrid. We stepped out of the Metro and were greeted with rain. Ugh! Barcelona…beautiful beach side Barcelona? No, wet, dark, miserable Barcelona. I am SO happy we are staying in a hotel here. I loved meeting people in the hostel, but it will be nice to now have a place to unpack and spread out. We of course had to umbrella, so we wander in the rain trying to find our hotel. We are lucky to speak a bit of Spanish because of living in San Diego so we quickly found our way…only a couple blocks. Phew!

Despite the rain, we were determined to see a bit of the city before retiring. It was only 9pm. We headed to the popular La Rambla and grabbed a nice dinner and chatted over wine. Then our story turns shady at 11:30 when we stepped back into the streets!

There weren’t many people out, because of the rain of course. We were immediately approached to purchase an umbrella. We did, because, well, it was freaking raining. My hair curls in the rain…I wasn’t happy! I negotiated the guy down so we got a good price. I might have paid way more because I hate being wet though!

So here we are, cold wet, buzzed from the wine huddling together under two umbrellas. Our umbrella salesman warns us to be careful. Almost as soon as he says that we are approached by an ultra-shady character trying to sell us a beer. (All over Barcelona at night there are guys carrying six-packs of this red beer attempting to sell them on the streets) We pass him up, only to come across another even creepier character! By this time, Ryan and I are uncomfortable and prefer to head back, Arlene considered continuing, but we said no way! Into a cab and back to the hotel. Our cab driver was young and really helpful. He gave us many suggestions on what to do the next night.

I am happy to say, the same street was completely different the next night. Even though it was creepy, we had a TON of laughs about the stupid things we did…like taking cash out of the ATM…so hey, we have a story. Crazy! 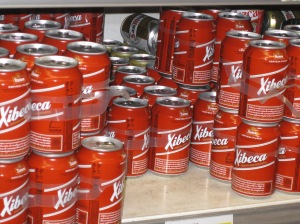 2 responses to “Parks in Madrid… & Rain in Barcelona”